Bouncing around the world, dev-advocating, software documenting, and getting myself into amusing misadventures

40 Years on, PAC-MAN Recreated with AI by NVIDIA Researchers

Now instead of Inky, Pinky, Binky and Clyde, I’m thinking of how cool it would be to do this with Mario. After all, Super Mario Maker is already a thing humans can use to build new levels. How cool would it be for a GAN to do that?

Links of the Day

Links of the Day

So, I’ve got an idea in my head (well, where else would it be?) about comparing open source to magic. That still needs a while to brew in my wizard’s cauldron, so stay tuned or set a remembrall to come back and check some time in the future.

But wait, don’t go yet! One of the common ideas in open source is “release early, release often”, so I’m putting up my thoughts now, in advance of weaving them into a more magical narrative. This post may have bugs, annoyances, and a few swear words, but rest assured if it breaks you can keep both pieces. Oh, and feel free to cringe at the titles, taken from popular songs - because what’s more magical than music?

On with the show…

I Want It That Way

Humans love novelty. Some people want to try new foods, see new places, or find new ways to use their coffee maker. I’m all three of those. But being a geek from birth, I also love finding new ways to use (and sometimes break) my computer.

On Windows I’m limited to changing my wallpaper or dragging my taskbar around. Or installing third-party graphical shells that don’t play nicely with the underlying system. On a Mac I’d have similar issues.

But on Linux I can get infinite diversity in infinite combinations. I can run the latest whiz-bang environment with rotating desktop cubes, or a barebones terminal with no graphics, or something that looks like it crawled out of the nineties. And I can mix and match bits of them as I see fit.

My current setup is a stripped-down graphical interface that I mostly use for running a terminal emulator and web browser. It’s fully keyboard-driven, uses arcane key bindings (thank you Vim!), and is almost perfectly tailored for my needs. Going back to one of the standard operating systems makes me feel like typing with boxing gloves on.

The Best Things in Life are Free

Back when I was a struggling student surviving on ramen and mince and cheese pies, I sure as Hell didn’t have any spare funds to throw at the latest Windows upgrade or (Heaven forbid) buying a Mac. I was stuck with what I had, or what I could download.

Then I saw a computer magazine in a local shop. It was one of those ones with CD-ROMs stuck to the front, offering the latest and greatest demos, shareware, and full versions of out-of-date software. And in this case, something called Knoppix Linux. For about 5 quid, I could not only get a new operating system, but one that came preinstalled with an office suite, programming IDE, graphics editor, and more. And I could share it with my friends for free!

For a penniless student like myself, this was the only way I could’ve got my grubby little hands on all of these shiny goodies. Pirating really wasn’t an option on a 56k baud modem, and this was before torrenting was really a thing.

I’ve Got the Power

Open source software has the potential to continuously improve, and be driven by the needs of the users themselves. Sure, you could say that Windows 10 is an improvement on Vista, but there are definite downsides like ads clogging up your Start menu and your telemetry being reported back to Microsoft.

You don’t like the direction in which your desktop environment is progressing? If enough users feel the same way, you can get together, fork it, and take it in a new direction. The MATE Desktop crew did just this with the Gnome codebase - they didn’t like the vision for Gnome 3.0, so took the 2.0 code and built their own version out of that. Just imagine trying to do the same thing with Windows or MacOS (admittedly, Gnome and MATE are desktop environments rather than full-blown operating systems like Windows, but that’s the beauty of it. Because it’s an open ecosystem, things are more modular. One system can have multiple desktop environments built in many different ways.)

Who Wants to Live Forever?

What’s the most popular word processing software in the world? What happens if the owner goes out of business? 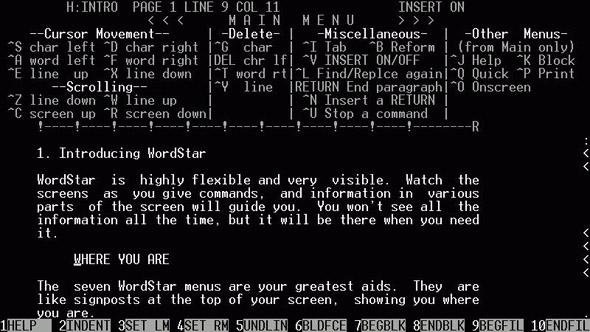 I’m not talking about Microsoft Word. I’m talking about WordStar, the dominant word processor of the 1980s. Thousands of users, including George R. R. Martin (from Game of Thrones fame) were left in the cold when it was abandoned. They’d invested time and effort into learning this system, and now what? Over time, operating systems deprecate old functions and old software “rots”. Now the only way to run that once powerful program is to install Linux and DOS emulator on top of that. Otherwise all of those .ws files you spent hours, days, and years on, are if not completely inaccessible, a total PITA to work with. It’s kind of ironic that now the only way to work with closed software like WordStar is via an open source system.

Now, how would that look in the modern day? Microsoft is way bigger than just Word, so let’s look at a smaller company that makes productivity tools: What would happen if Adobe went under?

What happens if an open-source project goes under? If enough people care about it they can fork the code and keep it going themselves, just like MATE did.

This is the quote that always springs to mind when I think of what open source has done for me personally. I got started with coding back in the bad old days of MS-DOS 5.0 and QBasic. I have fond memories of editing the physics in the Gorillas game to make the bananas fly where I wanted, and trying to build a Zork-like text adventure without initially realizing the sheer amount of object interactions I’d have to deal with.

Other kids got Donkey Kong. I had this monstrosity instead. via Gfycat

Around the World in 26 Cuisines

Over the course of the lockdown, I’ve been working, coding, sleeping, and binging Legends of Tomorrow. I’ve also been doing a lot of cooking, especially with my slow cooker.

With that in mind (and not much else to occupy us), my bubble buddies and I have decided upon a challenge. We’re going to cook a different dish each day (who am I kidding, whenever we feel like it), and each dish will be from a country starting with a different letter. Dish one will start with ‘A’, dish two with ‘B’, and so on.

Today, we’re kicking off with:

I’m a terminal junkie, and a heavy user of Neovim. This leads to a couple of issues when I’m using sudo:

What I want: I type sudo vim and it opens up Neovim with my user settings

I’ve finally worked out a fix. In your .zshrc (or .bashrc or .whateverrc) file:

Now, when I type sudo vim foo.txt, it brings up Neovim with my own settings!

Here are a few more of my shell aliases for anyone who’s interested. This is a follow-up to my shell clipboard aliases post.

I use exa instead of ls

I use bat instead of cat or less. It provides syntax highlighting and better Markdown support

Most files have a default opener. This command just opens them with that program.

I should probably switch these over to ripgrep since it’s recursive and much faster.

I’ve recently switched to Neovim instead of Vim for my editing needs.

Prettifies the mount output into columns

I’ve just uploaded a few shell aliases to github to make it easier to work with X terminals and the clipboard. Enjoy!

Get Started with Ethereum Development with Cryptozombies 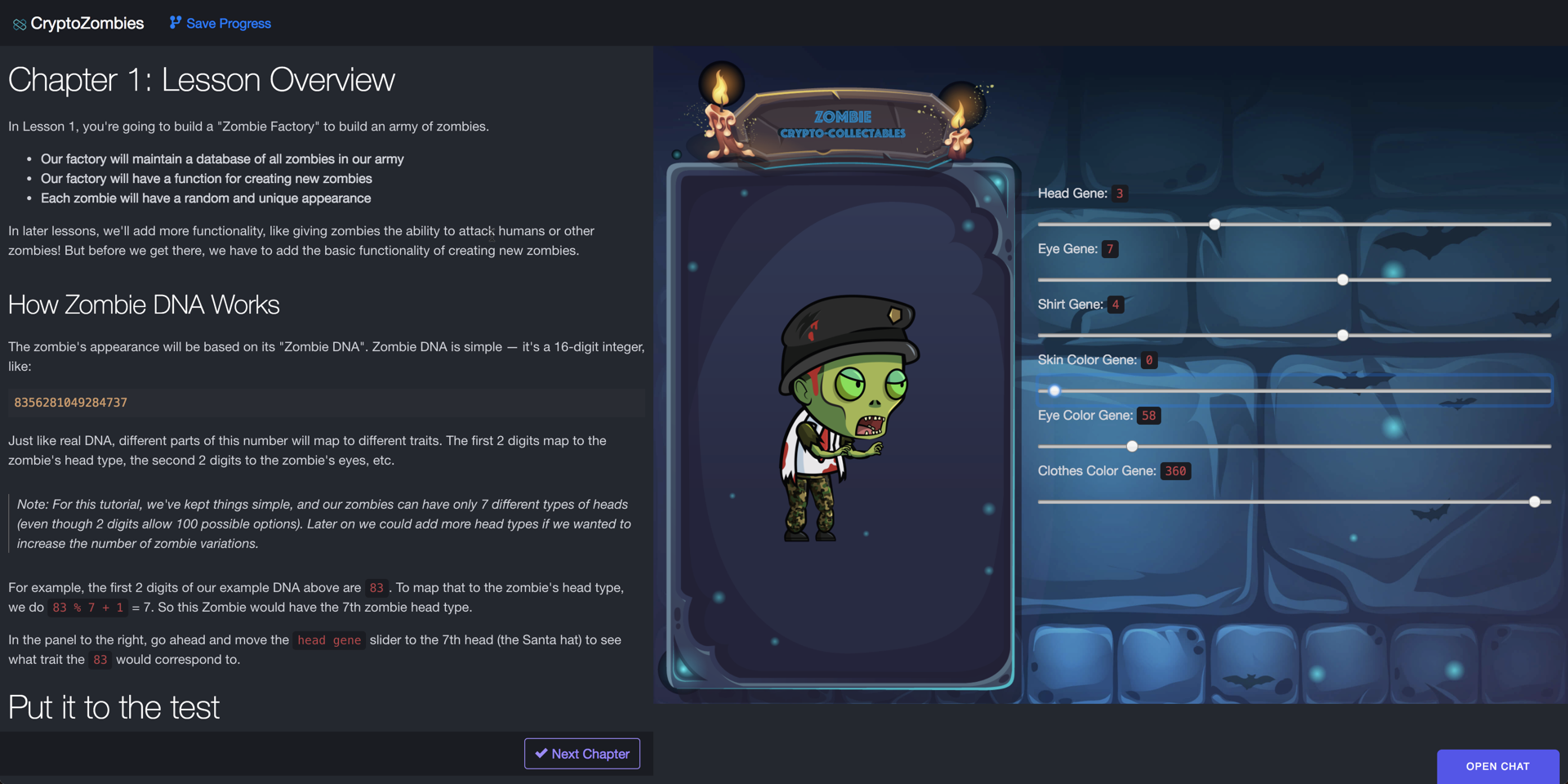 Want to learn how to code smart contracts and Dapps with Ethereum? Try out Cryptozombies. It’s by far one of the best tutorials I’ve found for getting a basic feel for Solidity and how it differs from other languages. I’ve been through the whole thing myself, and had a great time building my unstoppable zombie horde along the way.

Disclaimer: I have no affiliation with Cryptozombies or CleverFlare - I just know good resources when I see them!

Dislaimer 2: I’m not sure if the release of Solidity 0.6.0 introduces any breaking changes compared to what you learn in the course. Even so, it’s still good for getting your bearings with the language (and building a fun deck of zombie cards)